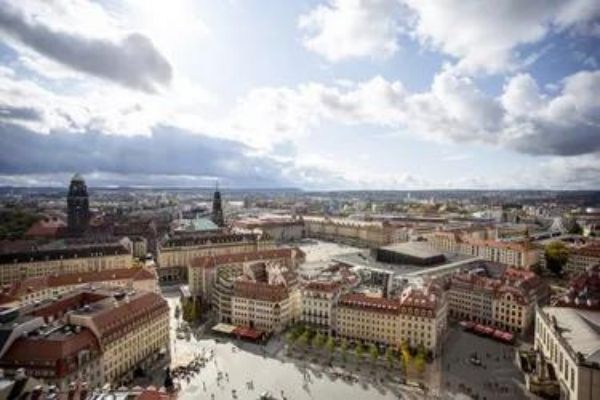 Heading to Germany? Your trip is sure to take you to at least one of Germany’s top 10 cities, whether you’re flying into Frankfurt’s airport, breathing the sea air in Hamburg, or enjoying Munich’s characteristic Bavarian Gemütlichkeit .

With a history ranging from tribal villages to Roman times to the devastating events of World War II, Germany has emerged as a world power with much to see.

The country is easy to traverse by train, autobahn or plane. Germany includes the low-brow of beer and sausages and the high-brow of great minds like composers Bach and Beethoven, writers Goethe, Schiller and the Brothers Grimm. That’s not even mentioning its world-famous Oktoberfest or magical Christmas markets.

Our list of the best cities in Germany showcases the diversity of this eclectic country. Discover the best of German cities, from the most charming Altstadts (old towns) to progressive city centers.

Berlin
Berlin is the capital and largest city of Germany. After East and West Germany separated during the Cold War, Berlin was reunited in 1990. It quickly emerged as a cosmopolitan, international city beloved for its avant-garde art, museums, architecture, history and nightlife.

Iconic structures such as the Fernsehturm (TV tower), the Reichstag (government building), and the G. Edchtnissirke (Kaiser Wilhelm Memorial Church ) have become symbols not only of Berlin, but of the country.

But despite its many attractions, Berlin can be difficult to navigate. But if you keep an open mind and travel outside the central neighborhood of Mitte, this is one of the coolest places in the world. From its multicultural street food to one-of-a-kind accommodations, Berlin will expand your definition of what a trip to Germany can be.

Berlin is also host to some of the best festivals in Germany every year. Experience an array of cultures during the Carneval der Kulturen , or the somewhat tame rebellion of Labor Day. At Christmas time, the city is at its most traditional with some of the best Christmas markets in the country.

Mun
Munich is known as München in Germany. It is the capital of Bavaria and the gateway to the Alps. This quintessential German city is the land of Lederhosen Giant Schweinscheux (ham hocks) and Oktoberfest.

People have their own proud pronunciation, history and traditions. Many Müncheners consider themselves Bavarians first and Germans second. This is what most people think of when they think of Germany.

The city offers first-class museums and imperial German architecture such as the Marienplatz and its famous Glockenspiel, as well as the Nymphenburg Palace. Munich is fancy, but that doesn’t mean people don’t know how to have fun. It is also home to favorite places like the English Garden.

Not to be missed is the city’s world-famous beer. A favorite export, it is best enjoyed in the city; In its traditional beer halls, biergartens or Oktoberfest’s grand beer tent. With more than six million visitors each year, it is just one of the many beer festivals held here each year.

Frankfurt
Thanks to its international airport, Frankfurt is a major travel hub for Germany and most of Europe. Many tourists come and go in and out of this modern city, but Frankfurt is worth the stop.

Largely destroyed in WWII, Frankfurt was the rare German city that decided not to recreate the past but to emerge anew. It is the country’s financial center with its own stock market (Deutsche Börse ) and glittering skyscrapers.

Its main tower is the only highrise open to the public and offers unbeatable views of the city skyline as well as its namesake main river.

If you’re craving something traditional in this modern jungle, explore Romerberg’s rebuilt city center. Home to the City Hall ( Römer ), which dates back to 1405, it is surrounded by quaint half-timbered houses.

For Frankfurt’s best traditional drink, Efelwein (or Abelwoi ), head across the river to the Sachsenhausen neighborhood.

Frankfurt is host to many important events and conventions, such as the International Book Fair in October. Started in 1949, it is the largest book fair in the world.

Hamburg
Hamburg is the second largest city in the north of Germany. Several waterways pass through its center and Hamburg has more bridges than Amsterdam and Venice combined. It has one of the largest harbors in the world and still embraces its gritty, seafaring past.

This is most evident in its red-light district of Reeperbahn. Complete with seedy bars and shops selling stripper boots, this is also a hot spot for clubs and music and is where The Beatles got their start.

The area around St. Pauli is also worth seeing. Spend time at the harbor with an early morning visit to the Fischmarkt (fish market). This meeting place for locals and tourists alike was started in 1703 and sells the freshest fish, flowers and spices with a side of live entertainment. The nearby HafenCity is newly built and offers the latest in shopping and dining.

If you’re into the classics, stick to the city center with its grand neoclassical Rathaus (City Hall) and its beautiful shopping street Mönckebergstraße , affectionately known as Mö .

Colon
Cologne (or Cologne), founded by the Romans, is one of the oldest cities in Germany. Cologne’s soaring cathedral is the centerpiece with twin towers reaching 157-meters into the sky and can be seen from across the city. Located right next to the train station, it is the first thing visitors see and they never take their eyes off it.

From here, walk through the old town and along the west bank of the Rhine River. Colorful 19th-century houses and ice cream cafes are the backdrop for a lovely stroll. Cologne’s art galleries and excellent museums mark every corner.

After all that walking, Cologne provides perfect refreshment. Kölsch is a beer from Cologne. Served in endless circulation in small glasses, the people of Cologne rarely drink any other beer.

If your favorite vice is chocolate, Cologne has the museum for you. The Chocolate Museum covers the long history of turning cocoa beans into chocolate and ends with the most delicious fountain.

Clearly, there are plenty of places to have a good time in Cologne but there’s no reason to limit yourself. If you visit Cologne for Carnival, the party will overtake the entire city. Cologne is the undisputed carnival king in Germany. Right before Lent, the whole city goes a little nuts with city-wide parades, balls and public spectacles.0610

Dresden
A short distance from Berlin, Dresden is called the “Florence of the Elbe”. Known for its baroque architecture and world-famous art treasures, it’s so picturesque that you might not realize that 80% of Dresden’s historic center was destroyed in World War II.

Landmarks have been recreated to their former glory such as the exemplary Frauenkirche (Church of Our Lady in Dresden), the Royal Zwinger Palace and the Fürstenzug (Procession of the Princesses, the world’s largest porcelain mural). Walk along the Brühlsche Terrasse and admire the restored grandeur.

That said, Dresden’s newer sections are enjoying a renaissance. Off the beaten path, Dresden offers a younger, more alternative side of the city, from a series of art-filled courtyards to the strangest cigarette factory that inspired Kurt Vonnegut’s “Slaughterhouse-Five.”

Whether your taste is in the old or the new, everyone can agree that a good time can be had at Dresden’s many biergartens .

Leipzig
Leipzig is another popular day trip from Berlin, but has enough attractions to make it a top stop.

Located at the confluence of three rivers, it has been a meeting place for great minds. Goethe was a student in Leipzig, Bach worked as a cantor here, and Martin Luther debated here.

Today, the New Leipzig School brings a new perspective to the art world. And a visit to Leipzig’s 1743 Gewandhaus orchestra proves that art is alive in this great German city. If you prefer culinary arts, Auerbachs Keller is one of the oldest restaurants in the country and was a favorite of Goethe and locals today.

Apart from being a center of German art and culture, the city also became famous in Germany’s recent history. Demonstrators in Leipzig began a peaceful revolution that led to the fall of the Berlin Wall in 1989. This subversive streak can be seen in his avant-garde cabarets that affect standard political structures.0810

Heidelberg
Heidelberg is one of the few cities in Germany that was not destroyed in World War II. This means plenty of old-world charm fills the narrow cobblestone streets and baroque city center, evoking the romantic period of 18th-century Germany.

It is one of the most picturesque places in Germany. Visitors enjoy spectacular views of the Alte Brücke (Old Bridge) that crosses the Necker River, the Filosofenweg (Philosopher’s Way) back into the city, and above all the ruins of the once magnificent Heidelberg Castle. This inspiring environment allowed Mark Twain to finish his novel, The Adventures of Huckleberry Finn , here.

Heidelberg has inspired many other great minds who have taken up residence at Heidelberg University, the oldest university in the country. It is one of the most famous universities in the world,

But that doesn’t mean students don’t know how to party. Heidelberg maintains a youthful atmosphere with great bars and restaurants and a former student prison in an academic environment. Continue to 9 of 10 below.

Dusseldorf
Dusseldorf is a cosmopolitan city with a playful atmosphere. The symbol of the city is the Dusseldorfer Radschlager (the boy who does the cartwheel) and his image can be seen on souvenirs and statues throughout the city. Works by great architects such as Gehry and Chipperfield also mark the cityscape.

Düsseldorf is known for its thriving art scene that has produced many greats. It is home to the composer Robert Schumann as well as the Düsseldorf Art Academy, which is responsible for famous graduates such as Joseph Beuys, Jörg Emmendorf and Gerhard Richter.

A center for trade, Düsseldorf hosts shows throughout the year. Gallery Düsseldorf is one of the world’s largest fashion trade fairs held every January. But shoppers can shop year-round on Königsallee (King’s Avenue), known locally as Kö.

After some serious shopping, settle down with Altbier , a German-style brown ale . It is top-fermented like British pale ales and can be enjoyed in classic pubs such as Fuchen, Schumacher, Schlussel or Uridge. The Altstadt (Old Town) is known as the “Longest Bar in the World”, with the party really never stopping during Carnival . 1010 no

Stuttgart
Stuttgart in southwest Germany is unfairly underrated. It’s a car lover’s dream, features modern architecture and has the biggest beer festival in Germany (outside of Oktoberfest).

Stuttgart is home to two of the world’s greatest car brands, Mercedes and Porsche. Manufacturing takes place nearby and there are world-class car museums for both companies.

The city itself has an excellent mix of architecture, with the Neues Schloss (New Palace) dating from the early 1800s, with a baroque center in the Schlossplatz . Against the classic landscape, there are contemporary elements such as metal and glass staircases.

The city was home to the world’s first telecommunications tower, the Fernsehturm Stuttgart (TV Tower), and it still dominates the sky. Stuttgart is also a UNESCO World Heritage Site among the buildings of the famous architect Le Corbusier.

One of its most fascinating structures is open to the public. Stuttgart’s public library is a haven for readers and architecture fans. Its bright, sophisticated design is Instagram ready and it is the best service for its citizens with more than 500,000 media units.

1 thought on “10 Best Cities to Visit in Germany”