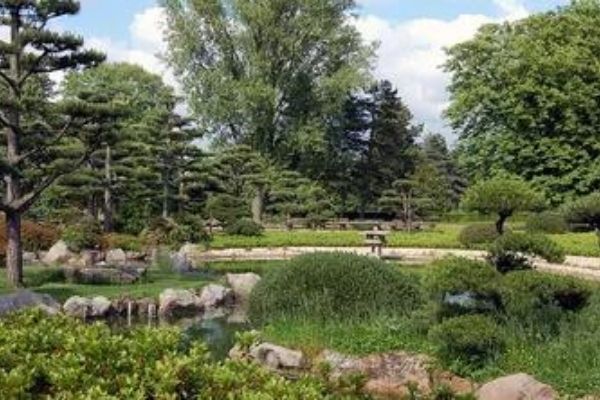 This magnificent German city is often overshadowed by its neighbor Cologne to the south. But Dusseldorf is an attraction unto itself, filled with residents who enjoy its rich arts and culture opportunities and luxury shopping.

All of which is set against the backdrop of the picturesque Rhine River. From amazing art to world-class shopping, here’s an overview of Düsseldorf’s most interesting things to see and do.

Walk around the Altstadt (Old Town).

The heart of Düsseldorf lies in its  Altstadt  (Old Town). Located between the shopping boulevard Königsalli and the Rhine River, the  Altstadt is  the perfect starting point to explore and get a feel for the city.

Stroll the cobble-stoned streets, duck into some quiet churches and sip an alt beer in one of the traditional brewery pubs.

Highlights of the Old Town include the Bergplatz, a square with an old palace tower. Bolkerstrasse is lined with Rhenish and international restaurants.

And one of Düsseldorf’s most famous landmarks is also located here,   the statue of Elector Jan Wellem in front of the beautiful Rathaus (city hall).

Gehry’s three twisted houses are an interesting contrast to the old elements, such as historic warehouses, pit walls and wrought iron railings. Apart from media companies, fashion and design studios, you will find some hip restaurants and bars here.

Before New York’s 5th Avenue, there was Konigsalli. From Prada and Gucci to Tiffany’s and Louis Vuitton, you can drop some serious cash here. But even if you’re not into shopping  , Kö  , as the locals call this street, is worth a visit.

A canal lined with chestnut trees runs parallel to the boulevard – perfect for a quiet stroll or attending events throughout the year.

To get from the Old Town to the new Media Harbor, walk along the paved Rhine River Promenade. On weekends, the street, which was off-limits to cars a few years ago, is filled with walkers, bikers and strollers.

Along the way, you’ll find the interesting art gallery Kunst im Tunnel , as well as the 565-foot-tall  Rheinturm  (Rhine Tower), which offers amazing views of the city and its surroundings.

Nordpark and other city parks

This is one of the most popular parks in Dusseldorf. Its 90-acre area makes it one of the city’s largest parks and one of the quietest spaces.

There are themed gardens, such as the Lily Garden and the Japanese Garden (gifted by the Japanese community of Düsseldorf). Other highlights include the Horse-Tamers Statue and the Aquazoo Löbecke Museum.

Düsseldorf is home to the renowned  Kunstkademie  (art academy), which is an integral part of the city’s art scene and has graduated the likes of Joseph Beuys, Jorg Emmendorf and Gerhard Richter.

Naturally, there is no shortage of world-class galleries and museums; Check out the Kunsthalle for contemporary art exhibitions, the Museum Kunstplast for fine arts from classical antiquity to the present, the K20 Gallery, which focuses on 20th-century art, or the K21, the city’s main museum for art since 1980, just to name a few. a few

Throughout the year this industrial hub bursts with color for its many festivals.

Dusseldorfer Carnival is the most fun. Second only to Cologne, the end-of-winter festivals are over-the-top with costumes, music and huge parades. Shout “  Helau ” and wave a bunch  of alt beers to celebrate  .

Another big festival takes place every July, the city  ‘s Gräst Kirmes am  Rhein (the biggest fair on the Rhine). It draws more than four million visitors for the week of the event.

The festival commemorates the city’s patron Saint Apollinaris with a historic procession on July 17, 2016. This year will be the 115th festival.

Take in the spectacular foliage at the Hofgarten

The historic  Hofgarten dates back  to 1770 and   stretches from Altstadt to Königsalli   to the Rhine. Step inside the baroque   Hofgertnerhaus   (Court Gardner House) and   Schloss Jägerhof,   a former hunting lodge that now houses the city’s Goethe Museum.

If you’re in the Altstadt, you’d be remiss not to visit one of the city’s traditional beer halls where you can try the local favorite, Altbier. This brown ale is simple and flavorful, but unlike the traditional German brew, it’s served in a 6 oz. Kach is one of the most popular beer halls in the Zum Urije neighborhood, dating back to the 1860s and brewing its own Altbier.

Do some souvenir shopping (or just grab a snack) at this foodie paradise near the Old Town. The market includes groceries for locals—produce, meat, bread, potatoes—but also vendors selling prepared foods from Germany and around the world. Bring home some spices or coffee as a souvenir.

Go to the top of the Rhine Tower

For some of the most spectacular views over Düsseldorf, head to the top of the Rhine Tower. Dusseldorf’s tallest building reaches nearly 800 feet and tours can only go to the top,

where there is an observation deck and a revolving restaurant. The entrance fee, an affordable 9 euros as of 2019, is well worth it. On a clear day, you can see all the way to Cologne.

This converted steam engine roundhouse is home to an extraordinary fleet of classic cars. Classic Remise is where experts restore vintage Mercedes, Porsche, BMW and more, preparing beauty for sale or storage.

For visitors, it is free. Many expensive autos are stored in glass cases to handle fluctuating environmental conditions. Continue to 13 of 15 below.

If you’re visiting Dusseldorf during the summer, one of the best ways to take in the city’s skyline is with a scenic boat tour. You can take an hour-long trip down the river, which includes drinks and an entertaining commentary.

Famous for its unique tower, the 14th-century St. Lambert’s Church is one of Düsseldorf’s most popular tourist attractions. Inside, the church is filled with unique 15th-century frescoes and a Renaissance-era tomb,

The outer tower took on a peculiar appearance when it was built in 1815 after a fire destroyed the rest of the church.

If you’re lucky enough to visit Düsseldorf in July, don’t miss the Kirmes, the “biggest fair on the Rhine,” which attracts more than four million visitors each year.

While the festival has religious roots (it was a celebration for Ravenna’s patron saint Apollinaris and the consecration of St. Lambert’s Basilica), it is now a fun celebration for the whole family, full of old-time amusement rides, roller coasters, food. stand, and more.

1 thought on “15 Fun Things to Do in Dusseldorf, Germany”