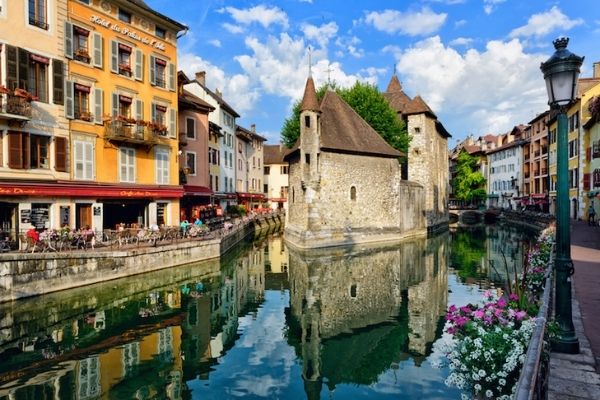 More than just Paris, France has incredibly beautiful cities waiting to be explored. History abounds throughout the country, and cathedrals, castles, culture and refined cuisine will tempt you on a journey of discovery of all things French.

With such a wealth of amazing places on offer, France’s best cities are a joy to visit. So, what are you waiting for? Bienvenue and happy travels!

Formerly the capital of the Dukes of Burgundy, Dijon flourished in the 14th and 15th centuries, as the city sponsored the arts and sciences.

As such, the old city center is beautiful to walk around due to its delightful sculptures and architecture, with the cathedral being particularly magnificent. While it’s not overwhelming, Dijon is definitely worth a stop for a few days, as it’s one of the best-looking French cities.

The largest city in the north of France, Lille was formerly a trading city that owed its wealth to the fact that it lies between Flanders and Paris. Nowadays, it has a beautiful city center and a vibrant cultural sector, with numerous museums that are worth checking out.

With a vibrant university community, some of the best places to shop and a thriving nightlife, Lille is a vibrant city with lots going on. For a glimpse of some of the beautiful Flemish and French architecture on offer, head to the Grand Place, La Vieille Bourse or the winding streets of the old town.

The fourth largest city in the country, Toulouse is a lively place, thanks to its large university community. With bustling markets, a vibrant music scene and a penchant for the alternative, Toulouse has many different sides – the old town is a peaceful and picturesque place to wander around.

Nicknamed ‘The Pink City’ because of the pink buildings, a beautiful way to see Toulouse is to take a boat trip along the Canal du Midi or the Garonne River that frames the centre.

The town where Joan of Arc was burned at the stake is a pleasant contrast to this violent event, and a lovely place to wander around. The Old Town is full of restored medieval buildings that were built with wattle and daub.

Situated on the banks of the Seine, one sight stands alone when it comes to visiting Rouen: the magnificent cathedral that dominates the centre. Dating to the 4th century, it contains an eclectic mix of architectural styles – inspiring Monet to create more than thirty of his paintings.

Located on the picturesque Mediterranean island of Corsica, Ajaccio – its capital – is well worth a stop, even if only to use it as a base to explore the beautiful landscapes that surround it.

The old town itself has some nice streets to stroll around, while the surrounding harbor conjures up images of the Côte d’Azur. Famous as the birthplace of Napoleon, Ajaccio is fun enough to visit without setting the world on fire.

Nicknamed the ‘White City’, because of its limestone buildings that are beautifully lit up at night, La Rochelle is a fascinating place to visit.

A once important port spanning centuries, the old port, historic center and picturesque waterfront are reasons enough to visit La Rochelle. With a large marina at Port des Minimes and surrounding sandy beaches, it’s a nice relaxing place to while away some time.

Located in the Alsace region, Colmar’s proximity to Germany has meant that it has changed hands numerous times between the two nations throughout its history. Tourists flock to the city for its stunning old town that seamlessly weaves cobblestone alleys with delightful canals and the distinctive houses that line its streets.

Churches and museums are scattered around the site, and the Eisenheim Altarpiece is particularly impressive to see. Because it is in a wine region, take the time to sample the best wines Colmar has to offer.

Located north of the Alps, Annecy’s proximity to Geneva, with its historic city center, makes it a popular day-trip among tourists. Also known as the ‘Venice of Savoy’, quaint canals criss-cross Annecy and weave their way between its ancient buildings.

Located on the shores of Lake Annecy, the city’s surroundings are stunning, and visitors can hike, bike or swim in nearby natural attractions. With a 14th-century castle located in the center, it’s a picturesque and memorable place to visit, although it can get a bit crowded in the summer.

Famous for the popes who set up shop in the city after fleeing Rome in the 14th century, Avignon was the capital of the Catholic Church for a period during the Middle Ages. The massive palace built by the Popes is impressive for its size and Gothic architecture, while the ramparts, towers and gates that line the old town are also wonderful to behold.

The old part of the city is beautifully framed by the Rhône River that snakes around it. A great time to visit is during the art festival in July, although you’ll have to wade through the crowds at this popular destination.

Once a playground for the rich and famous, this seaside resort now attracts families, surfers and sun worshipers alike. Located in the Pyrenees-Atlantiques, Biarritz’s town center is located on the Bay of Biscay,

And is famous for its beautiful beaches and excellent beaches, which are its main attractions. Although the city is not the most picturesque to visit, its excellent location by the water makes up for its slight downfall.

The capital of Alsace, Strasbourg has a stunning historic center and a strategic setting on the west bank of the Rhône. As a result, it has been contested by France and Germany throughout its long history.

Now, however, raw EU buildings glisten in the sun and, along with a throng of students, help give this ancient city a modern air. The Gothic cathedral is simply stunning to behold, as is the delightful La Petite France that houses the old part of town.

Located on the banks of the Loire, the city has constantly reinvented itself throughout Nantes’ long and tumultuous history. As such, it has numerous sites from different eras that lure visitors to its shores.

As the historic capital of Brittany, the old medieval center of Nantes, with its cathedral and castle, is charming to explore. In recent years, it has developed a thriving student body that gives the city its vibrant atmosphere. An incredible and unique attraction to visit is Machines de Illil – a strange and futuristic display of giant mechanical animals.

1 thought on “Best cities to visit in France”